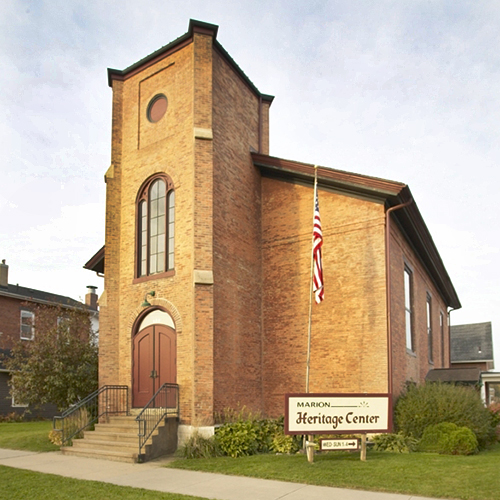 The Marion Heritage Center & Museum serves as a community center for educational programs, historical displays, art exhibits, and cultural events. The facility is managed by Marion Historical Society, Inc. which was formed to discover, interpret and preserve Marion’s unique history and to provide activities for the community and surrounding area.

The Marion Heritage Center building was originally a Methodist church. Construction began in 1850, and completed in 1855. In 1875 the church was purchased by the local Baptist congregation and used by them until 1957 when the building was sold to the Marion branch of the Cedar Rapids YMCA. In 1965, Varnes & Hunter purchased the building for an Auto Parts store. The structure was purchased in 1999 by concerned citizens with a vision of creating a community facility. After a year of renovations, the Marion Heritage Center opened in 2001.

Marion area history and traditions have been actively preserved since settlers first arrived in the 1830s. This work was spearheaded by many individual residents and former organizations such as the Linn County Old Settlers Association. The establishment of the Marion Historical Society helped coordinate these efforts. In addition to their own acquisitions, the Society has been designated as the official repository of historic records for the City of Marion.

The Marion Historical Society is a membership organization that serves to engage the public in the history, traditions, resources and ongoing preservation of the Marion Heritage Center & Museum for the enrichment of the community.

Directors serve three-year terms with positions accepted at the July annual meeting. All meetings are open to the public. Check the events calendar for meeting dates and times.

The Marion Heritage Center is available for private gatherings of up to 150 people. Contact us for additional information.

From John B. Newhall’s Emigrant Guide published in 1841

Marion, the county seat of Linn, is located near the centre of the county, about four miles east of the Cedar River, at the edge of a beautiful grove on a gentle prairie-roll. It contains three stores, a commodious hotel, post office, a sawmill in successful operation, and several neat dwellings, is rapidly improving, and bids fair to become a place of character and importance.